My father was a bluegrass musician whose family originated from the Appalachian mountains. As a young man, he sang and played acoustic guitar at drive-in theaters and old time radio shows. He was a mandolin picker and a third generation fiddle player as well. My earliest memories recall our family's Christmas parties where he and his father huddled together with their fiddles in the back room of our house sipping whiskey and sharing songs with my uncles. The sound of the fiddle characterized my childhood. It was synonymous with the sound of his voice. Sometimes I couldn't tell the two apart except that he could say things with his fiddle his words would never allow him to express.

On July 21st, 2017, my father passed away leaving behind a collection of broken fiddles, mostly ill-kept as his health declined.  In October of the same year, I had a significant dream I'd like to share with you along with several events that followed.

In the dream, I was in England. It was dark and misty. I was floating outside of an old stone cottage as if I were a spirit or had been led there like Scrooge and the ghost of Christmas Yet To Come. I came to a window and saw an orange light shining from inside. As I floated toward the scene, I heard two voices, one of an adult whom I recognized as a friend from Colorado. The other was the voice of my son, Brighton. The two figures were sitting in the window across from each other. Between them were the pieces of my father's broken violin. My Colorado friend was telling Brighton all that needed to be done in order to restore the violin. He was assuring him the violin could be restored and that Brighton was to receive this as part of his inheritance.

I woke up with tears in my eyes and I knew this dream was significant. I shared it with my wife, Sarah but told no one else about it. Later this same morning, we took Brighton to his baseball game where my father in law, Woody, met us to watch him play. As Brighton rounded the bases and my daughter, Belle played in the bleachers, Woody said to me,

"There is something I have been meaning to tell you. It has been on my heart to pay for your father's violin to be restored."

I swallowed my heart and stared at him with wide, searching eyes, trying to figure out how or when Sarah could have told him about my dream. But it had only occurred hours before and I knew it was impossible for her to have told him. He had no idea about the dream. When I shared it with him it became apparent something larger than ourselves was at play.

Fast forward to January of 2019. I had finally dropped off the violin at a local repair shop. I was preparing for several trips, one to Colorado where I would record music with my friend. Yes, the same one who was in the dream. Only days after that trip, I was to fly to England for a series of speaking engagements. None of this was planned at the time of the dream.

Toward the end of the trip, I had a day off and took a train to Brighton. I thought about the dream as I looked out the window to the English countryside and knew something significant was going to happen in this city. I walked out of the train station and looked for the nearest coffee shop. As I walked down the street I passed a toy museum and felt a strong inclination to go inside. I took note of this feeling and continued on to get my coffee. (Priorities, right? haha.) I stepped outside of the coffee shop with coffee in hand and looked up the street. The toy museum continued to call out to me.  I couldn't shake the sensation so I went back.

Inside, the walls were full of old toys that had been preserved and were now kept behind glass cases. I was transported to another time, an older, simpler time when amusements came much easier before the digital age accentuated our demand for entertainment and desensitized our ability to experience wonder in the simple mechanisms of wind up toys and electric trains.

The workers behind the counter greeted me. One with a screwdriver in his hand tinkering with some toy while a young girl held a pencil and clipboard in hers. We exchanged small talk about their toys until I noticed something behind them and fell silent.  On the wall was an advertisement for restoring a train called "The Brighton Belle." 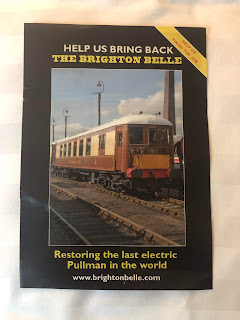 Perhaps you caught it already but my son's name is Brighton. My daughter's name is Belle.  The dream was about restoration and inheritance. I took the pamphlet with me and began to pray with my heart racing as I walked the streets of Brighton. A few blocks over and the sounds of a young girl's violin entered my ears. She was busking, playing old folk songs and smiling as I walked by.

Later this night, I called and told Sarah about all I had experienced. She was elated and began to tell me of her own experience back home. Before I left for the trip, she and I had moved a painting from our bedroom to our den. It is a painting of a locomotive my friend Chris Underwood painted a few years before he died. She sat in our den in a time of prayer and recalled how the painting took on a new significance for her. This was happening simultaneously as I was having my experience in Brighton. 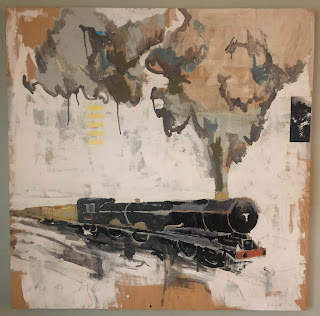 A few days later I returned home and got the voicemail. My father's violin was finished. I could pick it up anytime.

Hope has the final word.